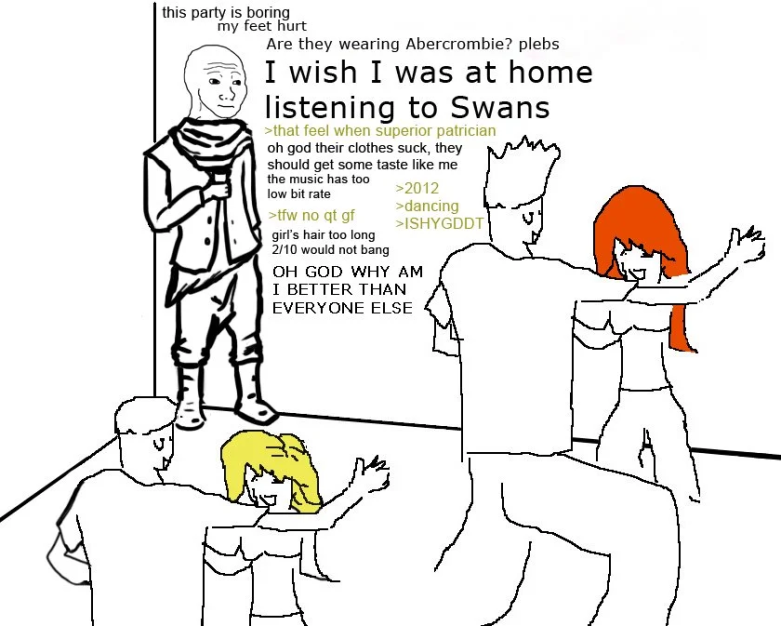 Easily hidden in plain sight in this one-panel are signs of a moment of transcendence. The comic masterfully portrays the self-important internet “patrician” (or the deluded neckbeard who believes himself to be one). But it only achieves this mastery — this capacity for compression: how many nonwhite pixels does it even have? — by fiddling with the frame. A standard trick in the movies is to slide some nondiegetic music into view, showing it being produced from some visible in-story source. This is meant to have the effect of tickling your brain, very slightly disrupting the strict separation between story and storyteller to make the frame shimmer for a split second. The comic does this in the opposite direction: a non-diegetic effect of dialectical sublation is let escape, like an air bubble, from the confines of the .jpg.

To ruin the joke: the constitutive contradiction of the hero is that he’s superior in every relevant sense, but has no cute girlfriend (which really only epitomizes a more fundamental desire for belonging in plebeian society). In the comic, he gives a minimal exposition of this constitutive contradiction and proceeds to disavow it: oh god, why must I be better than everybody else? Note that he could have disavowed patrician status instead: why can’t I shake off the pretense and fit in? This would be character development, whereas the comic wants to capture a repetitive riff, an ostinato. But the ostinato wears thin: the hero is no longer content with self-congratulation; the party scene stages (enacts, deploys, showcases) the burden of patrician status. An axiological crisis takes hold of the situation: the hero now doubts whether being better is better.

The comic stops a fraction of a second before realization of the second antinomy sinks in. It dares us to finish the thought. What are the outcomes? Either the first antinomy is upheld, leading to disfigurement of patrician identity, which comes to be defined by rejection and non-belonging, or it’s derogated, leading to a transfiguration of belonging (possibly symbolizing the transfiguration of tribal affinities into civil societies).

Re-reading my own text to keep track was giving me a headache, so I went and made a diagram. 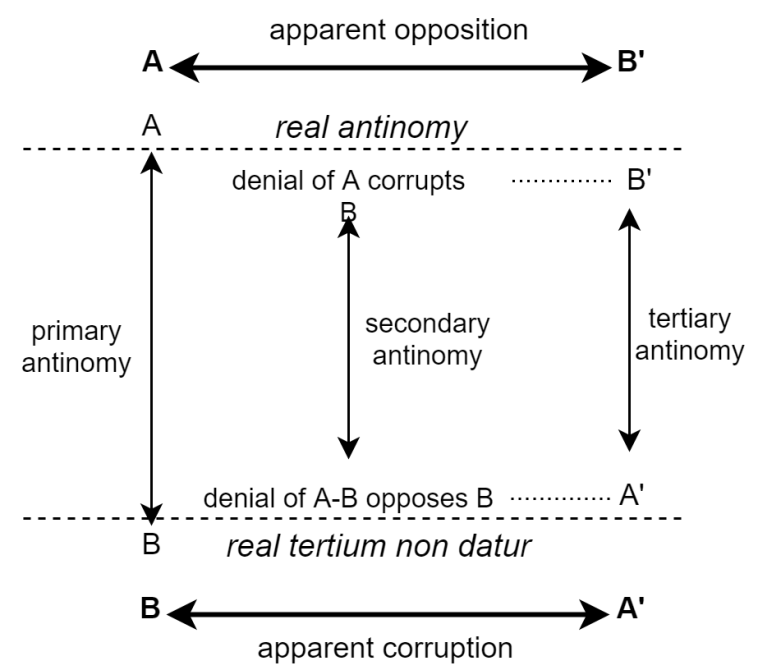 God is a lobster, said once a wise man. He has two claws, one to select materials and a second to press them into strata. The second antinomy is a deconstruction of the first: the first antinomy is set against a metaphorical rock, placed in a real conflictive context and picked apart, both marrow and bone. The third antinomy is a consolidation of the second; it steps down one level of meta and presents again a simple, sensible dyad. A’, B’ are transformed from A, B and appeared in inverted position. B’, the transfiguration of natural affinity into abstract fraternité stands with A (the original patrician, to oversimplify) on the side of the reality of antinomies. But these are not the same; indeed, natural elitism appears at odds with civil society. Likewise, A’, the transfigured patrician, stands with B on the side of the refutation of antinomies. These are also not the same; patricianism modifies itself so it can get a cute girlfriend, but this is a unconvincing corruption of natural seduction — the very same motion that transforms Thag, alpha caveman, into Chad, the hobgoblin of little minds.

The pseudoalgebraic form of the diagram (where B’ logically succeeds B even as it dialectically arises from A) reflects a sharp suspicion that this kind of “sandwich dialectics” — one that denies its own form en route to sublation — is somewhat generalizable. Indeed sandwich dialectics appears in my sources first in a handwritten notebook from many many moons ago; weeks ago already as an analysis of the “patrician”, and now again from rereading Élie Ayache’s “Blank Swan”

Standard economics (something close to “natural axiology” in the sense of “natural transformations” between functors in category theory) sharply distinguishes risk from uncertainty, the former standing for a probabilistic superposition of alternate states of the world, and the latter for the nonprobabilistic ignorance of what the hell can happen. There’s an avid market for risk, not for uncertainty. One of the building blocks of Ayache’s derivation is the denial of this distinction. His whole story relies on a radical critique of probability in favor of meillassouxsian-badovian “contingency”; in light of Meillassoux’s “Après la finitude” and its piercing argument for the necessity of contingency, the concept of “risk” from standard natural axiology falls out of quability.

Is any of this under truth-rain? I don’t know, I can’t quite understand Ayache’s book despite knowing Meillassoux well. But it exemplifies the sandwich dialectics much better than the “patrician” comic does! The primary antinomy of standard natural axiology (where A is uncertainty and B is risk) gives way to a secondary antinomy between Taleb (the denial of black swans corrupts risk analysis) and Ayache (the denial of the risk-uncertainty dyad opposes risk analysis) — and let us remember that both these men are derivative traders. What comes out on the side of the reality of the primary antinomy (where standard natural axiology hasn’t been *metaphysically* challenged) is a corrupted version of risk where talebists see “fat tails” instead of mixture distributions everywhere. What comes out on the side of tertium non datur (contingency, the metaphysical elephant Ayache wants to warn us about) is a higher or larger uncertainty-like concept. But hark! This tertiary antinomy (Taleb versus Ayache, fat tails verus volatility surfing, B’ versus A’) meaningfully relates to the first antinomy twice: the becoming-contingency in A’ reaffirms the reality of the market — this is the gist of Ayache’s philosophy — while the decadent platykurtosis of the black swan reaffirms that the market doesn’t make much sense at all.

We could play with sandwich dialectics by replacing A and B terms for quite some time. But the sandwich-dialectics of risk and uncertainty (which translates without much complication to the in-principle unrelated problems of chrematistics/right axiology and kairos/weather) tells us something that might clarify much of how the get-rich-quick and the explain-Jair stories relate to each other. And it’s actually easier to use sandwich dialectics from the inside out, starting from the terms of the secondary antinomy. In one pole, theory-at-large (B’, which nevertheless includes the get-rich-quick stuff) corrupts the blog’s original mission. In the other, the implicity primary antinomy (A-B, get-rich-quick versus understand-Jair) is false — a real tertium non datur (A’ — theory, general axiology, etc.) asserts itself over eveything else. B’, the first pole of the ensuing tertiary antinomy says that later references to Jair are corrupt and derivative; the A’ says that even the explain-Jair mode is a get-rich-quick story. This finally leads again to a relation of apparent opposition and a relation of apparent corruption.

If we were allowed to cargo-cult these instances — these formulas in the language of sandwich dialecics — we might either identify risk with chrematistics and uncertainty with kairos (the Taleb position) or the other way around (the Ayache position: the only chrematistics is in contingency; kairos is facing the possibility of death knowing that death is a possibility). At this point we could even identify these with A and B and go around again. But we should allow ourselves to reify (or at least pretend to) at some point: Taleb’s point is true but trivial; Ayache’s difficult to determine, but daring and somewhat backed by his success selling derivatives trading software. A typical example of Taleb’s conceptual style is his feud with Pinker over the cringecore 1000-pager “Enlightenment now!” There is so much to say about the facileness and concept-level naïveness of Pinker’s arguments — even more so if, as Taleb apparently has, you actually read his books — but instead we’re treated to a screaming match about error bars in statistics with small samples. Is this what the tertiary antinomy arising from A = uncertainty has to offer? Is the resulting “apparent opposition” real?

At least to the point where we take pity on the reader (an ourselves) and fail to develop this iteration of a primary antinomy, we have to side with whatever calls itself an “Ayache pole”. Of course, either this judgement by character (and maybe I should type “ad hominem” for SEO) works or it doesn’t. This is a primary antinomy. Then, denial of character judgements corrupts our trust in arguments that can’t be fully formalized and checked by computer; but denial of the difference between character and substantive judgements opposes the idea of substance, which is troublesome (it means that we can’t like Woody Allen movies, etc.). A tertiary antinomy arises: either there is an opposition between substantive and character judgements, or there’s none. The position of “real tertium non datur” relates the substance argument (evaluate the man for his movies, not his sexual appetites) to a corruption where substance and character judgements have been fused. The position in favor of the reality of the antinomy produces a disturbing rejection of flights of hermeneutics in favor fused total judgements. You get the point.

Listen to the song, it’ s thoroughly good. The following approximates the meaning of the original words, but can’t convey the overall effect.

It’s my friend who has warned me that Science is angry now,
also that Science moves forward, sideward and everywhere else.

I haven’t seen this woman, nor did it interest me;
As an autodidact I live, working on my crops.

What could be that rage that she could not control?
They say she’s a real bitch, we should be careful.

She grabbed three men and shoved them into a tube;
she kicked them into the moon to get her some rocks;

what’s worse, she dropped them into the sea;
and then for forty days she kept them jailed;

This is a funny but beautiful Andean retelling (a slightly subversive one, but still) of the myth of Prometheus. It has to be a traditional folk song (even though it’s sung in Spanish and not Runasimi or Aymara) because it denies the essential condition of space exploration — a motto that I even have pasted on my laptop cover: per aspera ad astra. Here men are not bound to hard toil in hopes of incremental success — Science, a real bitch, kicks them out of our planet’s gravity field to teach them a lesson. It’s in this way that the folk singer subverts the myth of Prometheus: there, man is punished for having dared to transcend; here, man transcends because of some prior sin.

But a wider look at space exploration deflates per aspera ad astra as promethean ethos impulse. Man, uppercase, billions of them, daydreamed of space here and there but didn’t want whitey on the moon; this happens because hegemonic powers finds themselves locked into silent war (“cold”, they said) and despairing for technology; it happens because American president John Kennedy signs the order to rehabilitate Nazi rocket scientists. It happens because Nazi rocket scientists originally thrived. Prior sins underwrite the literally super-human achievements of the Sputnik and Apollo 11. A world order of liberal values fails to find capital for such acts of defiance.

This says something about chrematistics. It’s anecdotal (which means — it can’t be shown to be the only way to do this), but it would seem that both in Alfredo Dominguez’s and Werner von Braun’s versions, a kind of right-axiology of transcendence (enacting inspiring feats of the human spirit) happens to be underwritten by the *inversion* of certain left-axiologies that have, too, wide appeal. What is the larger axiology here? What’s the structure of axiologies of cruelty (note well — not acts of cruelty — leave that to the cruel) that enable general axiology (“infinite power, infinite bliss”) and liberation?

There’s some sandwich dialectics to this too. But this post is already running way too long.

View all posts by asemic horizon